The little corner of Bavaria near the Austrian border hides more treasures than one would expect. Up there in the Alps, there is a place called the Eagle's nest. Originally built for secret meetings of the German Nazi party this place has a lot of history to be explored. It used to be the summer residence of Adolf Hitler, now a major tourism destination. Here he worked on the plans to invade Russia during WWII. Take a walk on the top and on each side you will find the views mesmerising. While in the area, you can also see the Dokumentation Obersalzberg, a museum that chronicles the region’s sinister Nazi past. There are also some medieval landmarks including the abbey church, on the site of the 12th-century basilica, and the castle, which was originally the residence of the provosts and later the summer residence of the Bavarian kings. A day here will be filled with interesting history and amazing views.
But even if you don't call yourself a history aficionado you will appreciate the unmatched view of the Bavarian Alps, the King lake, the mountains and the valley all around. 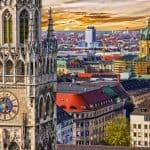 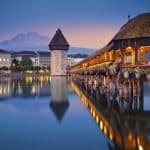 Lucerne / Zurich area
We are using cookies to make your browsing experiencs as smooth as possible and to analyze visits using Google Analytics. You can manage cookie settings in your internet browser.OK